A Shade of Blood — Bella Forrest 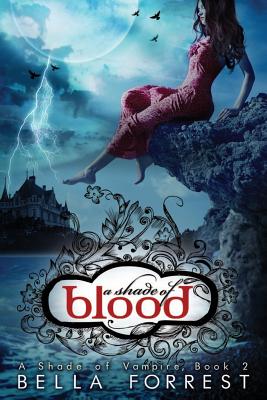 THE SERIES WITH OVER A MILLION BOOKS SOLD *** #1 Bestseller in Vampire Romance, Paranormal & Fantasy.*** FULL LENGTH NOVEL (more than twice as long as Book 1). Having been delighted by the bestselling debut, A Shade Of Vampire, readers are begging for more. In A Shade Of Blood, Bella Forrest transports you deeper into a unique, enthralling and beautifully sensitive story. Prepare to be lost in its pages... When Sofia Claremont was kidnapped to a sunless island, uncharted by any map and ruled by the most powerful vampire coven on the planet, she believed she'd forever be a captive of its dark ruler, Derek Novak. Now, after months of surviving an endless night, the morning sun may soon rise again for Sofia. Something has possessed Derek's heart and he offers her a gift no human slave has ever been given in the history of his cursed island: escape. High school, prom and a chance to move on with her life now await her. But will she be able to forget the horrors that steal her sleep away at night? ... or the feelings that haunt her for that tormented prince of darkness? Scroll up & click the buy button now to find out... "When I read A Shade of Vampire I fell in love ... A Shade of Blood is twice as intense and a dozen times more emotional ... The two things I love most about this series, aside from my love of Derek and Sofia, are the intricate plot and the character development ... Mind officially blown is all I can say ... Forrest creates this world, molds and shapes it into a tangible sphere of imagination where anything and everything is possible. It sucks you deep into the depths of The Shade where vampires rule and humans are the prey, but one girl's stands to change it all. I'm enamored by the connection between Derek and Sofia as well as the intertwining pasts and futures of the characters around them. Hats off to Bella Forrest and good God give us the third book soon!" - PFH Reviews "Brilliant follow-up in this addicting series!! A Shade of Blood is a gritty, sexy, emotion-ridden return to this captivating world of vampires, and I was hooked from start to finish as I devoured every word! ... The intensity between Sofia and Derek was amplified thanks to their emotions being so close to the surface, and every moment they shared together just had my pulse racing ... My heart ached and my stomach was twisted in knots for virtually the entire story, and by the time the huge jaw-dropping twist came at the end I was desperate for more! It's once again going to be a torturous wait for the next book as I grow increasingly nervous about what lies ahead, but A Shade of Vampire has definitely become one of my favorite series!" - Autumn Reviews "Absolutely captivating. A Shade of Blood, book 2 of the A Shade of Vampire series by Bella Forrest, blew this series wide open. I read book 1 back in February and found it to be a very impressive introduction to a fresh new YA Paranormal Romance series. I expected this installment to be good but it went beyond that, it pulled me in and never let go ... A Shade of Blood is a fascinating, full speed ahead rollercoaster ride that you'll find hard to put down. There is no 'supporting cast', I found myself wanting to know more and more about every single character I was introduced to. The combination of romance, betrayal, action and one surprise reveal after another makes for an exciting tale." - PrufReads
Reviews from Goodreads.com