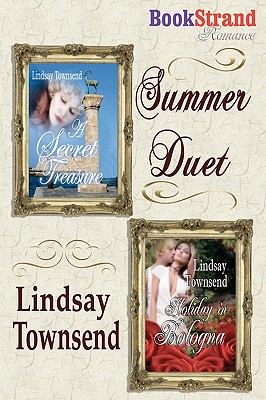 Share:
A Secret Treasure [BookStrand Historical Romance]: The Greek island of Rhodes: luxurious and hot, beloved haunt of the Sun God, steeped in the mysteries of the past. In the late 1930s during the gathering storm-clouds of war, it is a dangerous place to fall in love. When pretty, passionate Eve Burnett meets the darkly intriguing Julio Falcone, she is torn. As a man, Julio is powerfully attractive. As a policeman, he is bound to be a Fascist. Her brother, David, who is missing, is connected to the Greek Partisans who wish to liberate Rhodes from their Italian overlords. Now, as David appears at their parents' house soon after Julio makes Eve's acquaintance, Eve is compelled to hide her brother and a mysterious gold statuette. The Fascists are looking for him and this secret treasure. Soon, Eve realizes that she may be forced to choose between the man she loves and the ultimate safety of her family. ** Holiday in Bologna [BookStrand Contemporary Romance]: Heidi Manelli, a bright, lively Anglo-Italian, arrives in Italy on a mission. A letter given to her on her 21st birthday revealed that her real name is Soleari and she has family living in Bologna. Orphaned, she is unsure how her estranged relatives will receive her. Standing outside the Soleari villa, she encounters the quietly charismatic yet aloof Stefano. He's suspicious of her sudden appearance and disinclined to believe who she is. After pleading from her aunt, Heidi reluctantly agrees to stay at the villa, where she swiftly discovers more mysteries, and danger. She turns to Stefano for help, but will he come through? Is their developing relationship a holiday romance, or something deeper? Is her holiday in Bologna going to change her life forever? ** A BookStrand Mainstream Romance