A Seal in the Family — Maria Coffey 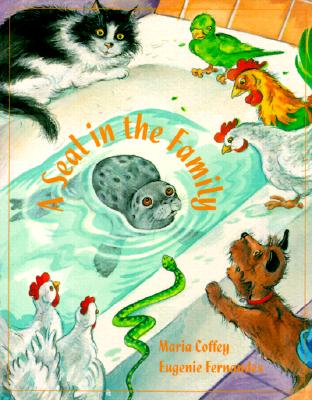 
One summer day while Teelo the cat waits on the beach of his Cloud Island home, he hears a strange and sad crying noise - and it appears to be coming from a rock! Teelo investigates and is shocked when the rock moves. It isn't a rock after all, but a young seal pup with beautiful brown eyes and a gray speckled coat.
When Victor arrives home he assures Teelo that the pup's mother is only out fishing and will return soon. Yet that night, while Victor and his unique family are cozy in their house, Teelo can still hear the lonely cries of the seal pup drifting up from the beach.
The next evening the pup is still alone on the beach and Victor decides she must come to live in his house. But in a home crowded with a cat, a dog, hens, a rooster, a parrot, a snake and a man, it is hard to find a place to put a seal! They finally decide that the bathtub will make a good spot and that Lucille will make a good name. Victor spends much of his time catching fish to feed the rapidly growing seal and to keep her plaintive cries at bay. When Lucille is old enough, Victor decides it is time to return her to the sea - but she is terrified of the now unfamiliar ocean. Victor devises a clever trick to get Lucille swimming again and soon she is splashing around where she belongs.
The house seems quieter now and Teelo wonders if he will ever see his friend again. Several summers pass and then Teelo hears that same sad crying that first introduced Lucille to him. It is another seal pup! Lucille has brought her own baby to the beach that she knows is friendly.
This story is based on a real seal that Maria Coffey knew. A photograph of her, and information and speculation on the mystery of where she came from, are included at the back of the book.