A Rose So Fair — Myra Johnson 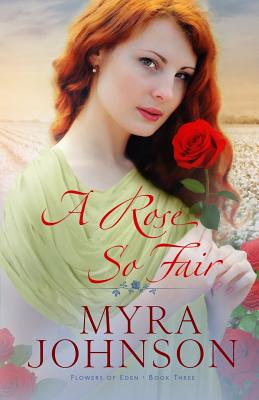 Plucky Rose Linwood grew up on her grandfather’s Arkansas tenant farm, a life her two older sisters never cared much for. Working alongside her grandpa, though, Rose learned to love the land as much as he did. Now her sisters have married and moved on, Grandpa has gone to his eternal reward, and Rose is determined to make a go of the farm on her own. But crops have been slow to recover since the drought of 1930-31, and the whole country struggles in the grip of the Great Depression. Drifters looking for work or handouts roam the countryside, some of them up to no good, so Rose keeps her trusty Winchester rifle at the ready.Caleb Wieland, Rose’s best friend, isn’t the farmer his late father was, and he’s about to lose his cotton crop to boll weevils. He’d let the farm go and search for work he’s more suited to, except he can’t desert his widowed mother. Besides, he’s been quietly falling in love with Rose since they were in grammar school, and the thought of leaving her behind is too much to bear. He’d give anything to win her heart, but Rose’s stubborn independence is proving as thorny as the flower for which she’s named.
Reviews from Goodreads.com