A Rendezvous To Remember — Geri Krotow 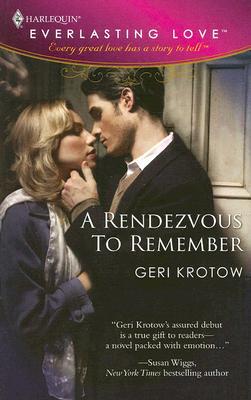 "My dear Melinda, I hate to see you throw away what may be the love of your life...."

Melinda Thompson knew that her grandmother had always adored Nick. But Grammy's gone now and Melinda's on the verge of divorce....

When she comes home to her widowed grandfather, Grandpa Jack hands her a leather-bound journal--and invites her to look into some family secrets.

Grammy's voice rings out from the journal, begun when she was in her twenties and living in Nazi-occupied Belgium. Breathlessly, Melinda reads the story of a young woman involved in the Resistance and the British airman whose life she saved. The story of passionate love and a wartime promise. One that saw her grandparents, Esmee and Jack, through World War II. And a marriage of more than sixty years.

With the example of her grandparents' lives, Melinda looks for the courage to believe again. In the love of her life.
Reviews from Goodreads.com