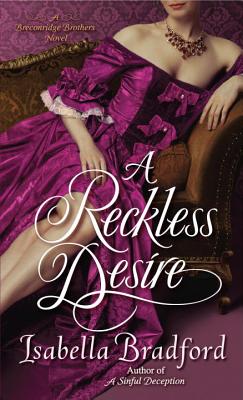 Lord Rivers Fitzroy is as charming and sought-after as his rakish elder brothers, though he immerses himself more in dusty books and scholarly pursuits than in bawdy houses. Yet, Hell-bent on making the most of his remaining bachelorhood now that his father insists he marry, Rivers becomes the favorite of a troupe of Italian dancers. One night, after a performance, the handsome lord is challenged with a most provocative wager: Turn the players' meek and mousy cousin into the first lady of the London stage.

But Lucia di Rossi is not what she seems. Scorned by the rest of her family, Lucia longs for the respect and stardom of a great actress. Rivers's wager could be the answer to all her hopes -- so long as he understands that she wants to be an actress, not his mistress. The two commence her metamorphosis in earnest -- even as passion begins to take center stage. As Lucia's dreams come true, she fears that it may be Rivers, not she, who is the master performer. Is he only making her believe he cares? Has she found the spotlight only to lose her heart -- or will the final curtain reveal a love strong enough to last?
Reviews from Goodreads.com