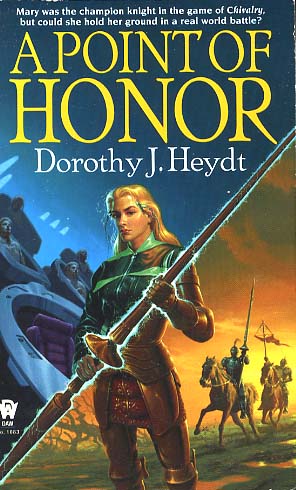 Sir Mary de Courcy is the current knightly Champion of the Winchester Lists--a world-renowned player in the VR game of Chivalry. As Mary Craven, she had been in graduate school working for her MBA when she won the grand prize in the school raffle--a surgical plug implant.

Once hardwired into the system, Mary discovered Chivalry, and whatever plans she had for a career in business vanished like smoke. Now she made her living in the Lists, fighting joust after joust, earning the monetary and virtual rewards which came with winning.

But when Mary defeated the mysterious Grey Knight of the Sea in single combat, and won the virtual manor of St. Chad's-on-Wye, she found out that Chivalry was not all fun and games. For St. Chad's was far more than just a manor house, and someone was willing to kill Mary and anyone around her to recover it....