A Person of Interest — Susan Choi 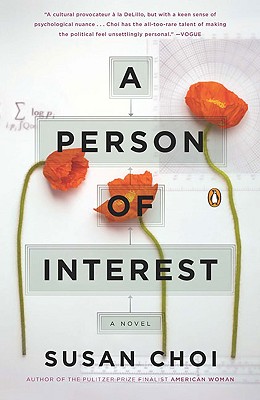 From an acclaimed novelist, an emotionally complex and riveting story of suspicion, innocence, and regret

When a mail bomb explodes in the campus office next door, Lee, an Asian American math professor at a second-tier university in the Midwest, comes under suspicion. The authorities believe he may be the infamous ?brain bomber,? an elusive terrorist whose primary targets are prominent scientists and mathematicians.

In the midst of campus tumult and grief over the star computer scientist who was killed by the bomb, Lee receives a disturbing letter from a figure in his past. Certain he is being targeted for revenge, he begins confronting key events in his life. Misunderstood by the people around him, Lee is not conscious that his behavior has begun to heighten suspicion in the minds of his colleagues, students, and neighbors, leading the FBI to designate him ?a person of interest? and pushing his life and reputation to the verge of ruin.

Intricately plotted and engrossing, A Person of Interest asks how far one man can run from his past, and explores the impact of scrutiny and suspicion in an age of terror. With its propulsive drive and vividly realized characters, Susan Choi?s latest novel is as thrilling as it is lyrical, and confirms her place as one of the most important young novelists chronicling the American experience.
Reviews from Goodreads.com