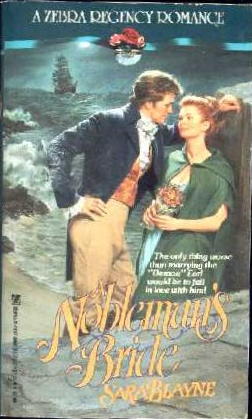 A MIND OF HER OWN
Free-spirited young Brie Morgan wanted no part of marriage to anyone -- certainly not to "Demon"Drake, the Earl of Malvern, a man she had never even set eyes on. Since her grandfather refused to break the pledge he'd made eighteen years before, Brie decided to rid herself of her betrothal another way. At her first meeting with Drake, she played the role of simpering fool to the hilt. To her fury, the darkly handsome nobleman was undeterred. No doubt a fool for a wife would suit him just fine, Brie fumed. It seemed she would be forced to share the Earl's name, but she'd be damned if she'd share his bed!

BROUGHT TO HEEL
Darnan Drake, embittered by the injuries that had abruptly ended his heroic naval exploits, cynically felt that Miss Brie Morgan would do as well as any other to provide a chatelaine for his house and the requisite heir. It came as a surprise to discover the ungrateful chit wanted no part of him; and even more so to realize no other wife would do for him. Damian never could resist a challenge, and he was determined to bring the fiery little minx to heel. Once Brie was installed as mistress of Malvern Castle, he'd see she satisfactorily performed her duties -- every one of them....