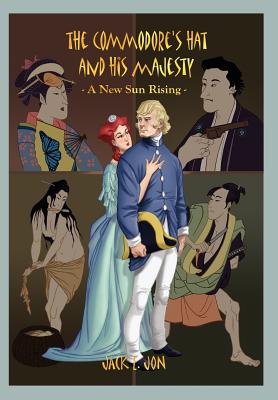 The Commodore's Hat and His Majesty involves a unique perspective of Japan through the eyes of an American who captains the shogun's flagship. The timeline is set amongst the backdrop of violent political change, spanning from the Perry's expedition to the downfall of the shogun. The writing brings to life picturesque landscapes along with Japan's seemingly alien manners and culture of that period. The book is intended to impact audiences with a historical glimpse into Japanese culture interwoven with violence, romance and friendship. Former Korean Primer Minister wrote the introduction to the book because he had first-hand negotiations with Japan to normalize the relations between the two countries.

The captain of whaling ship returns to New Bedford with a Japanese castaway, Manjiro. His young son, Nelson learns his language, develops a pointed interest in visiting Japan. Seven years pass; Manjiro returns to Japan when Commodore Perry's fleet arrives. His language skills make him useful in the treaty negotiations and Japan opens its doors to the world. The shogun government sends Manjiro to America as an interpreter for the delegation to ratify the treaty. Nelson is now the second mate on a luxury liner, and engaged to marry his childhood sweetheart, Violet. But she marries a British diplomat. Heartbroken, Nelson quits his job and boards his father's whaling ship. On a stop in Honolulu, Nelson is reunited with Manjiro. He introduces Nelson to the captain of the Kanrin-maru. He invites Nelson to teach at the naval academy in Edo. When Nelson arrives in Japan, the shogunate refuses him to teach in the capital. Instead, they appoint him the captain of the Kanrin-maru. Nelson accompanies the new American ambassador to have an audience with the shogun. After the audience, the ambassador invites all the foreign delegates to a banquet. To Nelson's surprise, Violet is among them and they soon rekindle their passionate love affair. During their rendezvous, the couple encounters Katsu's friend Sakamoto Ryoma, an anti-shogun activist, who saves them from a rabid dog. Sakamoto wants to change Japan and the friendship of two men begins. Violet's husband makes an argument with Nelson over his wife; disturbs the entourage of Lord Kagoshima and gets killed. To enforce reparations for James' death, the British send a fleet to Kagoshima, and Nelson accompanies them. The fleet's attack repelled by the defending forces, but Kagoshima eventually pays the reparation. Nelson decides to leave with Violet, however, he participates in the shogun's journey and encounters terrible weather and the ship is stranded. Fearing he will miss his departure with Violet, Nelson and Sakamoto leave the ship and try the land route. Their journey is far from uneventful; and when they finally get to Yokohama, Violet's ship has already sailed. Sakamoto succeeds in moving against the shogunate by forming an alliance between Kagoshima and Choshu, former mortal enemies. The shogunate's death squad then assassinates him in retaliation. His martyrdom enables the combined forces of Choshu and Kagoshima to embark upon an all-out war, resulting in the shogunate's final defeat ending their two hundred fifty years of rule. Before the fall of Osaka castle, Nelson helps the shogun escape to Edo. Nelson helps the new government open a naval academy, and discovers a student with a rare talent for leadership. The cadet's glittering future is threatened when he falls in love with a geisha, and incurs the wrath of a notorious gang boss. But Nelson salvages the situation and rescues his young protégé. Nelson entrusts him with the future of Japanese Navy and sets sail once more for New Bedford, where Violet is waiting for him.
Reviews from Goodreads.com