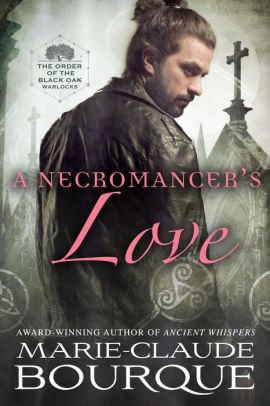 Can you save the unredeemable?A loyal necromancer harnessing powers from the dead…Son of a daemon and Celtic priestess, lethal necromancer Malcolm Dunsmuir is keeping the Seattle streets free of shadows out of fierce loyalty for his brother-in-arms, Warlock of the Black Oak, Knightley Morgan, now fighting the same fight on the other side of the country. But as vampires descend on his city, Malcolm can't hide from the darkness of his demon side, especially when an enticing human is trying her very best to bring him to the light.A fun-loving curvy blogger searching for her cursed brother…Life-loving Harper Grant has always believed in the inherent goodness of people, and when her little brother is turned into a vampire, she is determined to save him from his curse. As her chase for his salvation lands her in Seattle, she must team up with the deadliest man she has ever met in order to save her sibling. But as darkness descends upon her, will her positive outlook on life be enough to save both men, especially as she falls hard for the darkest of all?Feel the intensity of a NECROMANCER'S LOVE…Brought to you by gothic paranormal romance writer and American Title Winner, Marie-Claude Bourque, The Order of the Black Oak Series's sixth and last story.A character-driven series for lovers of classic paranormal romance. Intense, passionate, spellbinding. Bourque develops a world of mages and sorceresses unlike any other. -- Night Owl Reviews
Reviews from Goodreads.com