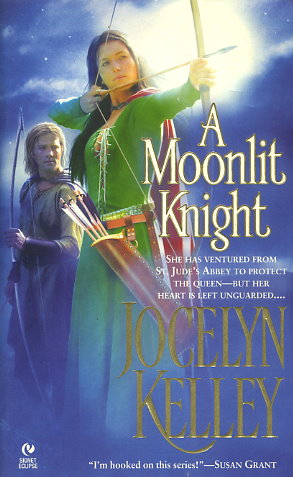 In 12th-century England, St. Jude's Abbey is no ordinary sanctuary of prayer and ritual. It was established by Eleanor of Aquitaine to train young women in the knightly arts, so that in times of trouble these formidable women can be called upon to protect the royal family and England. Here, Mallory and Saxon become irresistibly drawn to each other, and may soon discover the dangers of lust...and the redemptive power of love.

Summoned in the middle of the night, Mallory de Saint-Sebastian must leave the Abbey to protect Queen Eleanor's life as a revolt against King Henry rages. With a knight's sense of obligation, she is determined not only to shield Eleanor but to find the enemies threatening her. Arriving at St. Jude's Abbey, Saxon Fitz-Juste is amazed by the Queen's choice of a female knight as her newest warrior. A troubadour in Eleanor's royal court, Saxon is ostensibly loyal to Her Majesty, but his true mission remains to be seen.
Reviews from Goodreads.com