A Matter of Profit — Hilari Bell 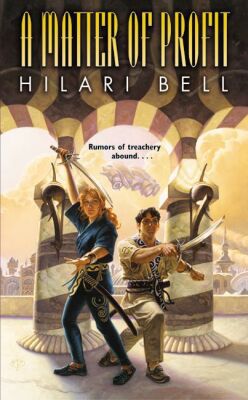 Strangers in a bizarre land -- that's what Ahvren's people, the Vivtare, are. They are the conquerors, the rulers now, of the T'Chin confederacy. But Ahvren is no longer sure what that means. After spending two years fighting a brutal war on another planet, here -- where not a single shot was fired -- victory doesn't seem quite so...victorious.

Ahvren welcomes the peace, but he doesn't fully trust it. How could all these people surrender so easily? Are they all cowards? Not likely. And his mistrust is not unwarranted: rumors abound of a plot to assassinate the Vivitare emperor.

But Ahvren's disdain for war is even greater than his mistrust of peace. The last thing he wants is to rejoin the emperor's fleet and conquer the next planet. So he strikes a bargain with his father. If he can uncover the plot to assassinate the emperor, Ahvren can choose his own path. It's a challenge that will take more wits than strength, and Ahvren's not sure he's up for it. But it's also the most important test he's ever faced and his success is vital. For not only does the emperor's life depend on it, so does Ahvren's.
Reviews from Goodreads.com