A Match Made in Texas — Arlene James 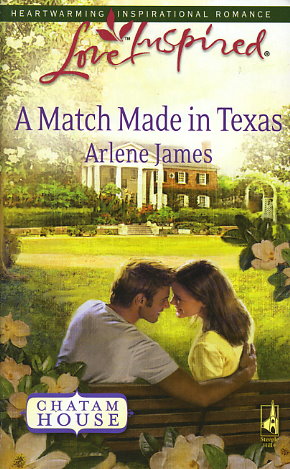 Nurse Chatam to the Rescue?

Kaylie Chatam is a pediatric nurse -- she cares for babies and children. But her new patient is a very handsome man. One with a harrowing secret. Why is Stephen Gallow recuperating from a serious injury at her family home in Texas? And why has Kaylie been asked to nurse him back to health? Her dear maiden aunts seem to be playing matchmaker. But Kaylie isn't expected to find true love and marry -- everyone knows that. Except Stephen...who just may hold the cure for them both!
Reviews from Goodreads.com

Wow! I don't know what I was thinking when I read/reviewed this book the first time. This book was EXCELLENT!!! Kaylie Chatam was a sweetheart and very lucky to get to take care of such a sexy hocky player! The end of this book just warmed me all over - it was so sweet how her whole family got them together to admit the truth...I just absolutely LOVED this book!!!

Stephen wasn't a Christian and had done so many bad things in his past. But he's human and he has regrets. The fact that he's looking for answers now is important. Kaylie's father had a bad attitude and needed someone like Stephen to set him straight.

A hocky player and a nurse? Well, is did work out - sure enough! I could not find anything wrong with this book this time. I thought that Steven's attitude was right no, and I loved their romance! To think that I gave this book three stars the first time around just amazes me - what WAS I thinking??? So romantic and sweet!

This book was about Kaylie Chatam, one of the Chatam triplets' nieces. She had three older brothers and a father (twice widowed) who was being a big baby about his medical conditions...AND about a man named Stephen Gallow, a famous hockey player for the Blades.

What I liked about this book:
It dealt with tough issues. Stephen was a worldly as one could get. He liked to party and drink. He lost his cousin after a drunk driving accident, and he was the drunk driver. He is in his current state of broken bones not from a hockey accident, but from again, getting behind the wheel of a car and driving through his garage, only to land in his fire place. Half his house fell on him. The book also hinted that his relationships with the opposite sex were possible one night stands and pure sexual...These were tough issues to deal with, and in the end showed the forgiveness Kaylie had for this man and how the Holy Spirit can change your life.

What I didn't like about this book:
I could not connect with the characters. I couldn't see the two falling in love. There were a couple stolen kisses before Stephen had any inkling that he wanted to have anything to do with God, and it seems Kaylie fell for him before he was saved. At the end of one chapter, they were only luke-warm about each other. Then in the next, they were engaged...I didn't quite believe it happened...

But mostly, I think it was a personal thing - I simply could not connect with these characters...