A Match Made In Bliss — Diann Walker 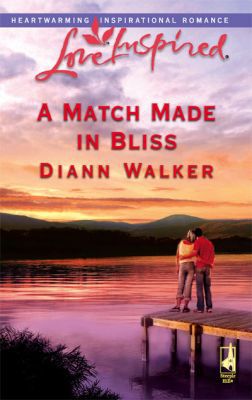 Suddenly single and unemployed, corporate attorney Lauren Romey needed a rest, a job and a new squeeze. Her friends took charge of the "rest" part. They booked her a trip to a Bliss Village bed-and-breakfast. And they thought they were going to take care of the "new squeeze" part as well, by setting her up with the innkeepers' son.

But when Lauren wound up at the wrong bed-and-breakfast, she found herself the fifth contestant in "Win Daddy's Heart," the unlikely brainchild of widowed owner Garrett Cantrell's teenage daughters. Throw in her ex-fiance, four quirky contestants and some very untimely TV coverage -- and it's open season for chaos...or love, where she least expected it.
Reviews from Goodreads.com

This was a very cute and sweet story, though meeting, falling in love, and becoming engaged in two weeks is a bit far-fetched. Still, it's just a story, and we can imagine it really can happen! The author did a great job in making me believe it could really happen as well, though in real life IT DOESN'T!!!

This book is about a widowed father for two teenagers. Garrett Cantrell feels his wife's death three years before was his fault. Ever since, he and his oldest daughter, who's nineteen, have not gotten along very well. But his daughter is fighting her own feelings of guilt over the car accident.

Then there's Lauren. She has a cute little dog who wears dresses and hats (a bit strange, but okay), and two friends. She also recently lost her fiancee to her best friend along with her job. She is shocked to learn that she is the fifth contestant in a "Win Daddy's Heart" contest put on by his daughters.

This was indeed a cute story. I especially loved reading about the family's healing.