A Man in Heat — Dallas Barnes 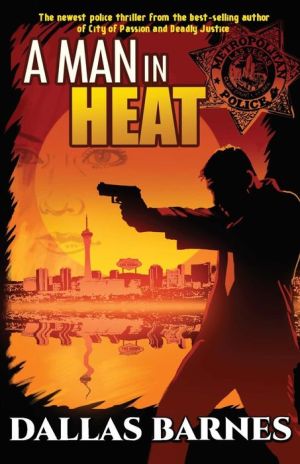 Jake Prescott is a respected LA cop, until the day he empties his Glock at his wife's killer in a detective squad room. A trial board quickly turns him into an ex-cop. An ex-cop with nowhere to hide.
Las Vegas-the City of Chance, Babylon in the desert, a place with no clocks, first names only, glimmering day and night-offers him refuge. That is until fate curses him a second time as the shadow of another murder hangs over him. April Winters, a hauntingly attractive Las Vegas homicide detective, draws a thin line between fact and fantasy, as she pieces together a bloody multi-murder with Jake as a prime suspect.

Hidden behind the glitter of Las Vegas, Jake Prescott struggles not only for innocence, but identity, fighting an unforgiving Blue Fraternity haunting him with a past he wants to forget...and a future filled with a deadly mix of both passion and fear.
Reviews from Goodreads.com