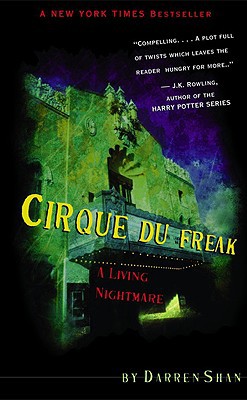 I don't expect you to believe me -- I wouldn't believe it myself if I hadn't lived it -- but it is.

Everything I describe in this book happened, just as I tell it.

The thing about real life is, when you do something stupid, it normally costs you. Real life is nasty. It's cruel. It doesn't care about heroes and happy endings and the way things should be. In real life, bad things happen. People die. Fights are lost. Evil often wins.

I just wanted to make that clear before I began.

Darren Shan and his best friend, Steve, get tickets to the Cirque Du Freak, a wonderfully gothic freak show featuring weird, frightening half human/ half animals who interact terrifyingly with the audience. In the midst of the excitement, true terror raises its head when Steve recognizes that one of the performers -- Mr. Crepsley -- is a vampire!

Steve remains after the show finishes to confront the vampire -- but his motives are surprising! In the shadows of a crumbling theater, a horrified Darren eavesdrops on his friend and the vampire, and is witness to a monstrous, disturbing plea.