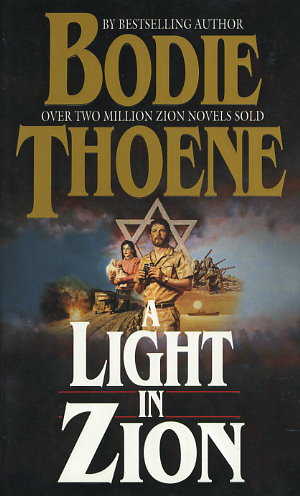 Share:
Would the Eve of Passover hold Another Miracle for the Nation's Survival?

With only six weeks before the final evacuation of the British from Israel, the dream of the rebirth of the Jewish nation appears doomed to extinction. The British have almost totally withdrawn from any interference between the battles of the nearly unarmed Jews and the Arab soldiers of Haj Amin Husseini.

The eve of Passover finds the Jewish sector of Jerusalem being starved into submission by an Arab siege. While Moshe and his Jewish troops risk their lives to open the Arab-held pass of Bab el Wad for a food convoy to save their people, David and Ellie search the Mediterranean for a freighter loaded with weapons for the Muslim Jihad and the bands of Arab soldiers who still vow to drive the Jews into the sea.

BOUND BY DESTINY YET OVERWHELMED BY ODDS, IS THERE ANY "LIGHT IN ZION"?