A Lesson in Dying — Ann Cleeves 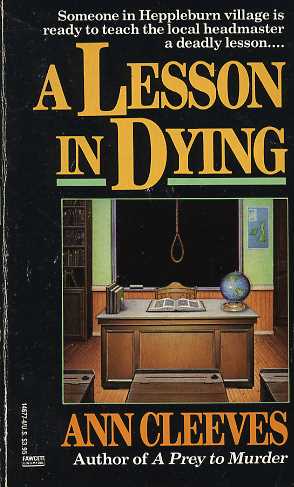 Share:
HEADMASTER HAROLD MEDBURN WAS DEAD, AND NOBODY IN THE VILLAGE REGRETTED IT.

Appropriately, it was on the evening of the village Halloween party that Medburn's body, dressed in academic cap and gown, was found swinging from the school's rusty netball hoop. And although his death brought fear to some hearts, relief' as the dominant response, for Medburn had been a bully, taking pleasure in tormenting whoever came within his reach.

The police accuse Medburn's wife, Kitty, of killing her i husband because he was about to leave her for another woman; but Jack Robson, the school caretaker, who had loved Kitty when they were classmates years ago, disagrees. Helped by his clever daughter Patty, he does his homework among Medburn's friends and neighbors and finds half a dozen of them had powerful motives for murdering the hated headmaster.

But it is in the ugly secrets of Medburn's life and in the dark passions that sometimes ensnare good people that Robson finally discovers the tragic--and desperately dangerous--truth....