A Lantern in Her Hand — Bess Streeter Aldrich 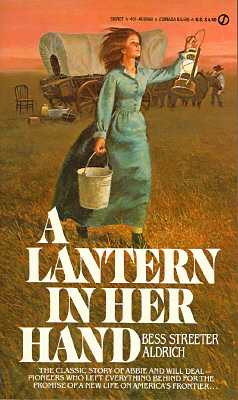 Share:
"Sometimes it all comes over me," young Abbie said to her fiance, "that I can do big things. It's ahead of me...kind of like a light in the woods that shines and stays far away. And when I read verse or hear music...or...sing...it beckons me one, and my throat hurts with wanting to do something great."

Abbie Deal did do something great, even if it wasn't what she had dreamed of. And years later, when her children, raised in a rude sod hut, were prosperous men and women of a thriving state, she could say proudly, "I've seen everything...and I've hardly been away from this yard. I've seen the feeble beginnings of a raw state and the civilization that developed there, and I've been part of the beginning and part of the growth. But it's funny," she added, "I was always too busy filling up the youngsters and getting patches on the overalls to notice that I was part of the epic."

A strong an vigorous picture of pioneer life. The magnificent story of a young girl who went West as a bride -- and helped to build a nation.