A Lady of Independence — Helen Argers 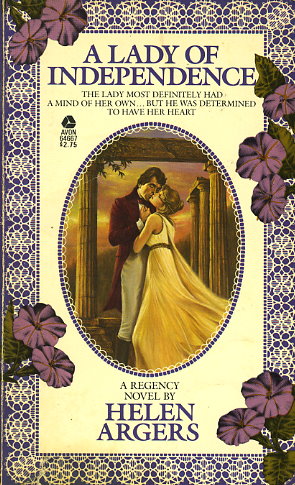 Share:
'MY LORD, IT IS AN HONOR I SHOULD PREFER TO DECLINE."

Astera Claybourne's startling reply to Viscount Weston's proposal of marriage left the dashing young bachelor in a state of shock. How dare she reject the splendid match arranged by her guardian, when any young woman in London would jump at such a chance?

The independently wealthy Astera had no need for the security of marriage, and no intention of confining herself to the life of a proper lady. Her outrageous behavior made the Viscount even more determined to possess her.

But what a merry chase she'd lead him! From the beautiful English countryside to the war-tom mountains of Greece, the rejected suitor pursued the lovely Astera. Added to his woes was the competition from the Greek men who were captivated by the English beauty And neither the Viscount nor the independent lady had time to notice that love, too, was in pursuit.