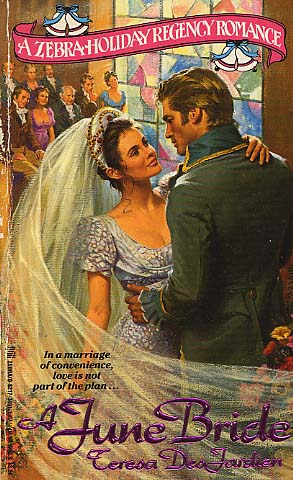 WEDDING BELLS
A hasty marriage to redeem her reputation was bad enough, but Alessandra's punishment for an innocent moment in the park was not to end there. Only if she and her new husband Jeffrey Huntingsley managed to share sleeping quarters for a month, yet leave their marriage unconsummated, would Alessandra's father agree to an annulment. A needlessly tedious exercise, Alessandro fumed, since it was a simple matter to remain at arm's distance from a husband she scarcely knew. Although he was a most handsome and agreeable gentleman. And the nights did seem inexplicably colder, longer, and lonelier
than ever before ....

WEDDING NIGHT
Observing the terms of the "annulment agreement" should have presented no difficulty for a gentleman Jeffrey Huntingsley. All it took was a scrupulous consideration for Alessandra's sensibilities, a modicum of self control, and a few pillows dividing the marriage bed down the middle. If all else failed, a midnight card game or two ought to do the trick. But the sight of his bride, adorably attired in a modest nightgown, was distinctly unsettling. Alessandra was proving a decent sort, and Jeffrey would be a scoundrel indeed to take advantage of her innocence, despite the inviting warmth he was convinced he saw in her eyes ... .
Reviews from Goodreads.com