A Husband For All Seasons — Irene Brand 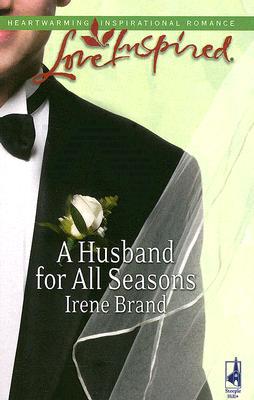 His faith was being tested for the first time: Chad Reece's promising pro football career was cut short by a devastating accident, and then a kidney transplant revealed his biological parents were a couple he'd considered family friends. Shaken, Chad was determined to recover on his own, when he met Vicky Lanham, a pretty hospital volunteer.

Vicky's passion for mission work impressed Chad, who felt a call of his own to assist others. Perhaps it was the start of God's new plan--a life together helping others.
Reviews from Goodreads.com

The book started out great. A rich NFL player has a freak accident and looses his kidney. Come to find out, it's the only kidney he had. Thankfully, his biological parents - friends of his that he had no idea were really his parents - were able to help him out. But his football career was over. So many things happening at once depressed Chad and made him question everything - including God. Thankfully Vicky was there to help him through his physical and mental anguish. In turn, he decided to help her through her own. But soon they learned that they were more than friends!

Somewhere along the line, I felt the book was being rushed. In a mere paragraph, months would pass. This book took place over more than a year! Also, the second half of the book seemed dull at times. But it had it's moments and is a clean romance - always a plus!