A House in the Country — Ruth Adam 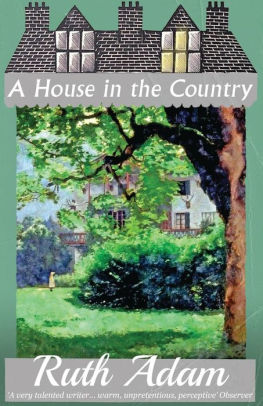 Share:
"[I]f only we could make the manor subscribe a little bit towards her own upkeep," we fretted.

But she was an aristocratic lady on our hands. All ideas for making her work for a living were wrecked on the fact that she was born to be served and not to serve.

Six friends have spent the dark, deprived years of World War II fantasising-in air raid shelters and food queues-about an idyllic life in a massive country house. With the coming of peace, they seize on a seductive newspaper ad and take possession of a neglected 33-room manor in Kent, with acres of lavish gardens and an elderly gardener yearning to revive the estate's glory days. But the realities of managing this behemoth soon dawn, including a knife-wielding maid, unruly pigs, and a paying guest who tells harrowing stories of her time in the French Resistance, not to mention the friends' conscientious efforts to offer staff a fair 40-hour work week and paid overtime. And then there's the ghost of an overworked scullery maid . . .

Based on the actual experiences of Ruth Adam, her husband, and their friends, A House in the Country is a witty and touching novel about the perils of dreams come true. But it's also a constantly entertaining tale packed with fascinating details of post-war life-and about the realities of life in the kind of house most of us only experience via Downton Abbey.