A Horse to Die For — Carolyn Banks 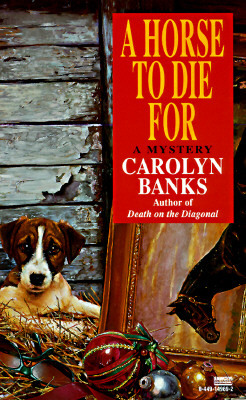 WHO'S BEATING A DEAD HORSE?


Certainly not die-hard horse aficionado Robin Vaughan. She would never lay a hand on any four-legged creature, least of all the magnificent horse her friend Lola had just received as a Christmas gift.


But Robin suspects that beautiful Noel isn't quite the horse he seems. For one thing he killed his last owner. For another he bears an uncanny resemblance to a horse called Wickie, who haunts Robin's past and whom she knows to be dead. In fact, she'd swear that Noel is Wickie. Can she prove it? She decides to try, and uncovers a scam so far-fetched it can hardly be believed and a villain too repellent to be real. But he's not only real, he's deadly dangerous, and Robin's on a breakneck ride with destiny--toward confrontation, truth, and terminal terror. . . .
"Carolyn Banks has a sense of style and wit."
--The New York Times
"Crisply flip dialogue is her métier."
--Los Angeles Times