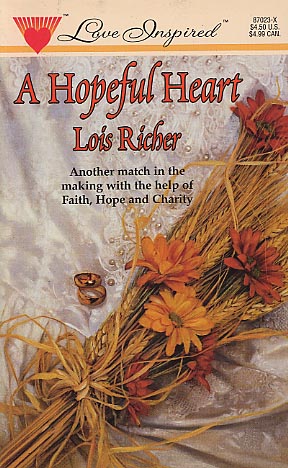 Her dream was within her grasp. Melanie Stewart's contest award would allow her to continue the Lord's work. But Mitch Stewart claimed he had won the prize. And amidst all the confusion, Melanie discovered that the town was practicing a little matchmaking.

Sweet-natured Melanie wasn't averse to falling in love...especially with brilliant Mitch. But her life hadn't been without turmoil. Could she trust in her ability to be a good wife and mother, and make a new lifelong dream...with Mitch?

FAITH, HOPE & CHARITY: With a little help from these matchmaking ladies, romance is sure to bloom for three very lucky couples.
Reviews from Goodreads.com

Okay, I must admit I am quite torn on how to rate/review this book. At times I loved it, at times I hated it, and other times I thought it was just 'okay.' I was all over the board with this one, but since I felt happy they married at the end, I went ahead and gave it four stars...

The story in itself is quite...uh...strange...two people - a man and a woman - both with the last name of Stewart, and the same first initial - receive a letter/phone call stating they'd just won $50,000. Come to find out, the whole thing was quite strange from the beginning.

Okay, then they move in together, go to the beach and have a pretty 'hot' day (and no, it's not all weather related)...

I must admit I thought Hope's story was much more realistic than the Stewerts', but that's just me...Oh, and I must admit I LOVED it when Faith showed up on Mitch's doorstep and announced that she was moving in...PRICELESS!!!

Okay, so the oddest part of the whole story was when Mitch was stalking Melanie after he asked her to marry him. I mean, he was OBSESSED and very over-bearing. If I had been Melanie, I would have run far, far away. I'd have called the cops and gotten a restraining order...it really made me VERY UNCOMFORTABLE...I skimmed through some of that part and even thought about not even finishing the book - that's how turned off I was...But I stuck with it and am glad I did because I liked the ending - when they finally dealt with all their bad stuff and got together...