A Hint of Seduction — Amelia Grey 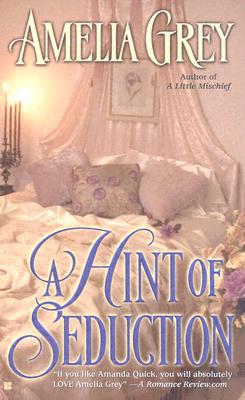 A lie of convenience
Having just passed her twenty-first birthday, Catherine Reynolds comes to London for the first time--on the pretense of having a Season and making a match.

A whisper of scandal
But Catherine is actually trying to find out who her real father is. She has three clues--three men listed in her mother's journal. One of them is her father--and the man who broke her mother's heart.

A spark of desire
When Catherine takes a spill from her horse in Hyde Park, a handsome stranger is there to rescue her--a man who takes what little breath she has away. But when she learns her hero is John Wickenham-Thickenham-Fines, the Earl of Chatwin, she is aghast. He could be her half brother. Now, her quest is much more urgent. For truth could trounce love in this dangerous game of chance...
Reviews from Goodreads.com