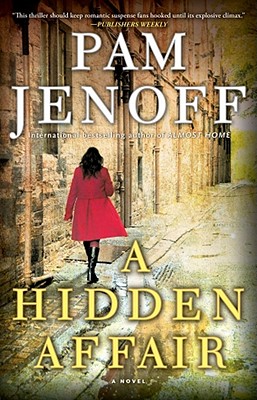 PAST WARS, PAST LIVES, PAST LOVES . . . CAN WE EVER REALLY LET THEM GO . . . AND SHOULD WE?
Ten years ago, U.S. State Department intelligence officer Jordan Weiss's life was turned upside down when she was told her college boyfriend, Jared, drowned in the River Cam. In a shocking discovery, though, she realizes that things weren't as they seemed and that she had been lied to and betrayed by those closest to her. Reeling from the shock-- and the knowledge that Jared is still alive--Jordan resigns her State Department post and sets off in search of answers. Traveling to Jared's last known whereabouts on the French Riviera, she encounters Nicole, a mysterious woman who flees after refusing to disclose what she knows about Jared.

Following Nicole across Europe, Jordan soon discovers that she is not alone in her pursuit-- Aaron, a handsome and enigmatic Israeli, is chasing Nicole for his own cryptic reasons. Though distrustful of each other, Jordan and Aaron join forces on a journey that takes them half a world away, and only steps ahead of grave peril.

As Jordan draws closer to finding the answers that have eluded her for a decade, larger questions remain: Can she reconcile her attraction to Aaron with her unresolved feelings for Jared, the only man she ever loved? Will the truth be too devastating to handle or finally set her free?

Will she have a chance at happiness at last? Thrilling, romantic, and impossible to put down, A Hidden Affair gives us a brave and relentless heroine who never gives up on her search for the truth.
Reviews from Goodreads.com

The story shows how strong a woman's love can be for the man who promised to marry her, and how enduring that love can last.

Jordan Weiss resigns from the U.S. Intelligence Dept. and is searching for her old love who she thought was dead. She is in Monaco looking for him, Jared Short.

She has an old address and when she arrives, a young woman, later identified as Nicole Short, is entering the building. When Jordan asks her about Jared she is evasive and when Jordan returns to ask more qustions, Nicole has fled.

Jordan meets and Israeli, Aaron, who is also following Nicole. He suggests they work together and when they do, they form a romantic relationship while maintaining a professional mistrust.

We learn that wine was a currency during WWII and that the Germans wanted the best wine from the region for the higher ranked officers and politicians. The locals attempted to hide the wine from the Germans and what happened to the wine becomes part of the mystery.

Jordan Weiss is a strong character and a good match for Aaron but she continues to search for Jared.

Pam Jenoff writes an interesting story that is well worth reading and the historical premise of the story is riveting.