A Heist Too Far — Rob Knipe 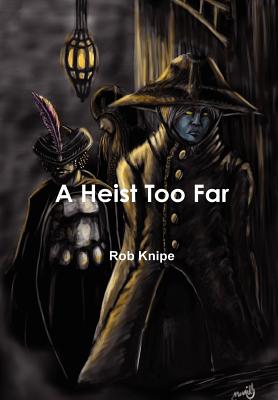 Mallik, an assassin with a short temper and an assortment of sharp weapons, Dick Swede a.k.a The Black Moustache, an almost famous highwayman, and Jules Van Jives, a scruffy elf with an obsession for fire and explosives are wanted men, but something is about to make them more wanted than usual. When an almost perfectly planned coach robbery goes horribly wrong and Mallik's love is killed, he'll stop at nothing to get his revenge, even if it means helping to liberate a fallen Dwarf citadel, rescuing villagers from their impending sacrifice and Dick shaving off his trademark moustache on the way. As their usual world falls apart before their eyes and they cross the line from novelty crook to noose-bait, Mallik tries to dig them out of a very deep hole. A Heist Too Far is a five hundred and seventy five page comical slant on fantasy, the humour making light of every situation no matter how grim they really are.
Reviews from Goodreads.com