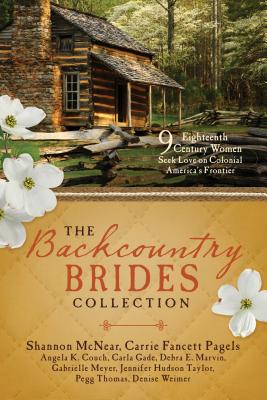 Travel into Colonial America where nine women seek love, but they each know a future husband requires the necessary skills to survive in the backcountry. Living in areas exposed to nature's ferocity, prone to Indian attack, and cut off from regular supplies, can hearts overcome the dangers to find lasting love?

Heart of Nantahala by Jennifer Hudson Taylor
1757 - (North Carolina)
Joseph Gregory plans to buy a lumber mill, but Mabel Walker becomes a formidable opponent. When she's forced to make a painful decision, she must choose between survival and love.

Her Redcoat by Pegg Thomas
1763 - Fort Michilimackinac (Michigan) during Pontiac's Rebellion
Laurette Pettigrew grew up in the northern frontier. Henry Bedlow arrived against his will. Their chance meeting changes everything. Will a deadly clash of cultures keep them from finding happiness?

A Worthy Groom by Angela K. Couch
1771 - Sapling Grove settlement on the Holston River (Tennessee)
The Cowden temper has been Marcus's lifelong bane. A trait Lorinda Cowden curses. Now, winning the heart of his bride hinges on fighting a war without raising a fist.

Across Three Autumns by Denise Weimer
1778-1780 - (Georgia)
Fighting Loyalists and Indians, Jenny White settles for strength over love . . .until Scottish scout Caylan McIntosh leads her family on a harrowing exodus out of Georgia's Revolutionary "Hornet's Nest."

The Counterfeit Tory by Shannon McNear
1780 - (South Carolina)
Tasked with infiltrating an infamous Tory gang, Jed Wheeler has no wish to endanger the leader's cousin, Lizzy Cunningham. He risks not only his life. . .but his heart.

Love's Undoing by Gabrielle Meyer
1792 - Fur Post on the Upper Mississippi River (Minnesota)
When Englishman Henry Kingsley meets Abi McCrea, the daughter of a Scottish fur trader and Indian mother, will their worlds keep them apart, or have they finally found somewhere they truly belong?
"