A Hazard of Hearts — Barbara Cartland 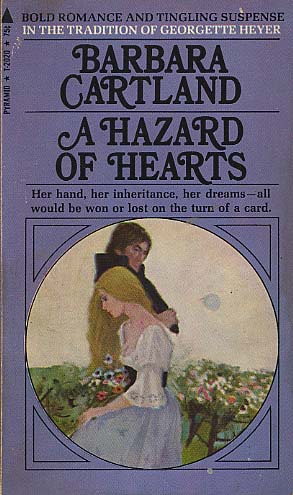 Serena Staverley was happy at Staverley Court. She loved to roam the stately gardens of her family manor and dream of her future love.

But then a cruel fate dealt her a shattering blow. Her father was killed in a duel after losing her hand, her inheritance and her home in a game of cards. All this was now the property of the infamous Lord Justin, Marquis of Vulcan -- a man whose reputation made it unwise for any decent woman to be seen in his company. A strange, cold man whose clifftop mansion echoed with terrible secrets.

With her freedom lost on the turn of a card, Serena is bound by a debt of honour to marry. She could run, or she could bow to the will of the brooding stranger who held her father's debt. Either way it meant dishonor -- and the end of her dreams.

After her arrival at his ancestral home of Mandrake, she discovers by chance the secrets of his family, and is thrust into a world of smugglers, highwaymen, abduction and murder.
Reviews from Goodreads.com