A Handful of Trouble — Cathie Linz 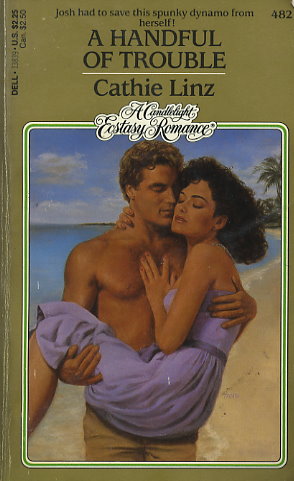 Josh Phillips was everything Pam Warner thought she never wanted. A knight in shining armor, he was persistently rescuing her, pulling her out of scrapes that were nobody's business but her own. Bermuda wasn't big enough for both of them! Pam was allergic to domineering men like Josh, and even more disturbed by the current that sizzled between them. How could she hate a man she couldn't push away? Josh's passionate embraces seared her to the soul, but nothing could keep her from striking out as he tried to rule her life. How had this brash stranger turned her fight for freedom into a battlefield of love?
Reviews from Goodreads.com