A Fistful of Collars — Spencer Quinn 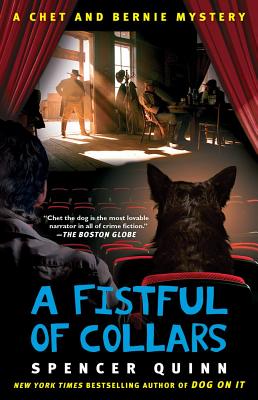 Share:
Chet the dog and Bernie, his private investigator companion, are back in the New York Times bestselling mystery series as they investigate a movie star with a shady past.

Stephen King has called Chet “a canine Sam Spade full of joie de vivre.” Robert B. Parker has dubbed Spencer Quinn's writing “major league prose.” Each of the books in this irresistible mystery series is a New York Times bestseller and now Quinn returns with a story that reveals the true magnitude of Chet's star power.

Hoping to bring some Hollywood money to the Valley, the mayor lures a movie studio to town to shoot their next major production starring Thad Perry. Known for his bad behavior, Thad needs a babysitter and the mayor hires Chet and Bernie for the job. The money is good, but something smells fishy. When they dig into the details of an old crime, they discover that Thad has links to the Valley that go way back. To complicate matters, for some odd reason, Thad's cat, Brando, seems hellbent on making trouble for Chet.

Like the winning books before it, this latest in the series offers a top-notch mystery and a rollicking good read about this irresistible human-canine P.I. team.