A Family for Jana — Eileen Berger 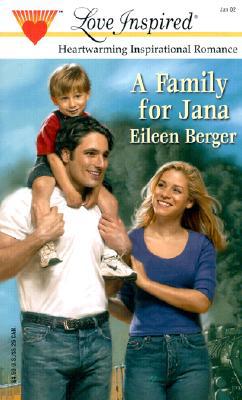 Between struggling to balance school and parenthood, Jana Jenson's hands were full. The single mother was not in the market for romance -- especially after experiencing the heartache of having her son's father abandon her. Still, Jana was grateful for the support of the Sylvan Falls community, particularly the kindness of handsome college professor Ray Hawkins....

Although a painful lesson from the past had taught Ray to guard his heart, he couldn't get Jana off his mind. He wanted to shower her with affection and favor her son with the fatherly attention he'd missed. With the ready-made family by his side, he could imagine happily-ever-after was possible. But could he and Jana find strength from above to heal their hurts and face their pasts when their newfound happiness was threatened?
Reviews from Goodreads.com

"You do believe in complicating your life, don't you Ray?"

My sentiments exactly! This was probably the BEST line of the book!!!

Professor Raymond Hawkins, III has a young student in his class who happens to be a single mother to a three year old - and he's falling for her! At first, he simply takes flowers to her ailing son at the hospital, then he asks her out on a non-date. Then he asks her and her son out on another non-date.

But there's the matter of student-teacher ethics, and he may just cross that line!

Though I was a bit uncomfortable with the fact that Ray openly dated Jana while she was his student, I think they handled it well. I did think he was complicating his life by taking such a chance. No matter what, it could be difficult to keep the work at work and not bring it "home." The fact that they made copies of her paper...Well, what about her tests and quizzes? She could have gotten the answers before-hand...

This was so refreshing in that the couple became engaged way before the end of the book. We got to see them walk down the aisle! The story was very sweet, and very innocent. I did cringe a few times when they kissed or when he wanted to hug her while she was still his student. But they got through it! Oh, I loved his confession: "I would like to kiss you, Jana." This confession came the very night Ray was made aware of accusations about him dating a student and change her grade! Like I said, he liked to complicate things!

This is a must read, and my favorite of the author's three books!