A Curse of Silence — Lauren Haney 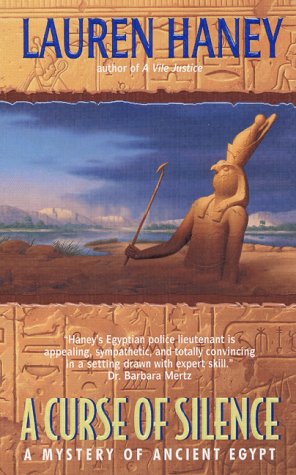 Share:
IN A SUN-RAVAGED REALM, HONOR IS PRIZED ABOVE ALL ELSE...AND THE PRICE OF SILENCE CAN BE DEATH.

A vile rumor sweeps across the desert like a swiftly gathering sandstorm: Queen Hatshepsut plans to disband much of her frontier army and transform its fortresses into storehouses. The arrival of Amonked--the Queen's cousin and Storekeeper of Amon--at the city of Buhen convinces an uneasy Lieutenant Bak of the Medjay police that the whisperings that have alarmed the populace are true. Then, a day after Amonked inspects the local garrison and departs, a body is found stabbed in the house where he and his party rested. The slain man was a local prince, beloved by his people, so Bak travels upriver to join the caravan and investigate. Though nothing tangible connects Amonked and his people to the heinous act, Bak's inquiry soon sheds a disturbing light on an inexplicable crime. For the clues suggest that twisted honor and vengeance lie at its root...and a shocking secret, protected by murder and silence, that could itself silence the truth--and Bak--for eternity.