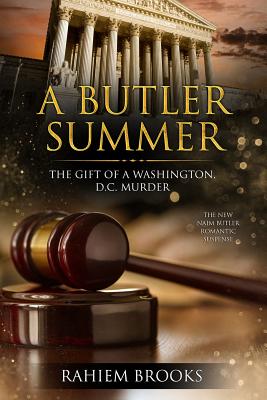 THE GIFT OF A WASHINGTON, D.C MURDER
In Washington, D.C., Naim Butler's defense strategy takes him to the highest reaches of criminal justice--and political scandal.
Seemingly out of the blue, Naim Butler receives a most desirable challenge to defend a psychopath in a capital murder situation. It seems that his lawyer-sleuth talents are wanted for a particular sensitive case. He's pleased to discover that he'll be joined by his partner in crime, in and out of bed, newspaper editor, Brandy Scott.
In the exclusive world to Washington politics, cover-ups and back door deals often go hand-in-hand with private fantasies and corruption. As Naim's investigation takes him to the multimillion-dollar homes of the city's elite in Georgetown to the United States District Courthouse, it becomes evident that even suited, insiders-only Washington upper crust has a scandalous side that its top figures want to keep quiet.
Not on Naim Butler's watch!
Reviews from Goodreads.com