A Boy and His Tank — Leo Frankowski 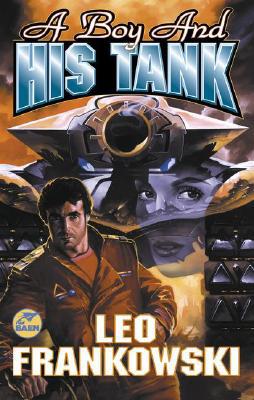 He Was a Rugged, Hardened Combat Veteran Who Had
Gone to Hell and Back--in Virtual Reality! Now He Had to
Face the Real Thing.. .

The planet New Kashubia started out as a gas giant, but when its sun went supernova, lighter elements were blasted into space. All that was left was a ball of heavy metals, heated to 8,000 degrees. As it cooled, tungsten solidified first at the surface, and layers of other metals continued down to a ball of mercury at the center. The sun meanwhile evolved into a pulsar with a deadly beam of radiation that baked the planet's surface. The New Kashuhians lived inside the planet, in tunnels drilled in a thousand foot thick layer of solid gold.

Still without carbon, oxygen, hydrogen, or even dirt, the colonists were the poorest people in the universe.

But when they combined virtual reality with tank warfare, giving their warriors symbiosis with their intelligent tanks, neither war nor the galaxy would ever be the same. Not to mention sex...