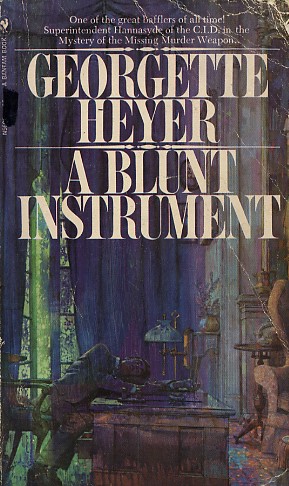 When Ernest Fletcher is found bludgeoned to death in his study, everyone is shocked and mystified: Ernest was well liked and respected, so who would have a motive for killing him? Inspectors of Scotland Yard felt it was an unlikely crime for the London suburbs: a perfectly respectable chap at home with his head bashed in. It seems the real Fletcher was far from the gentleman he pretended to be. There is, in fact, no shortage of people who wanted him dead.

Superintendent Hannasyde and Sergeant Hemingway, with consummate skill, uncover one dirty little secret after another, and with them, a host of people who all have reasons for wanting Fletcher dead. Who tiptoed into the study to do the deed? The rather nefarious nephew Neville? A neighbor's wandering wife? A fat man in a bowler hat?

The mystery's key was a blunt instrument--a weapon that the police could not find... and that the murderer can to use once more. Then, a second murder is committed, with striking similarities to the first, giving a grotesque twist to a very unusual case, and the inspectors realize they are up against a killer on a mission....