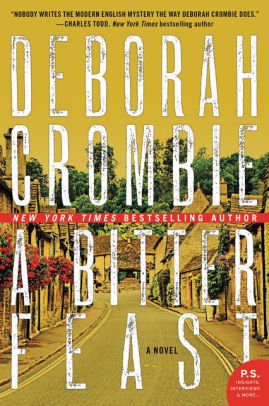 New York Times bestselling author Deborah Crombie returns with a mesmerizing entry in her “excellent” (Miami Herald) series, in which Scotland Yard detectives Duncan Kincaid and Gemma James are pulled into a dangerous web of secrets, lies, and murder that simmers beneath the surface of a tranquil Cotswolds village.

Scotland Yard Detective Superintendent Duncan Kincaid and his wife, Detective Inspector Gemma James, have been invited for a relaxing weekend in the Cotswolds, one of Britain's most enchanting regions, famous for its rolling hills, golden cottages, and picturesque villages.

Duncan, Gemma, and their children are guests at Beck House, the family estate of Melody Talbot, Gemma's detective sergeant. The Talbot family is wealthy, prominent, and powerful -- Melody's father is the publisher of one of London's largest and most influential newspapers. The centerpiece of this glorious fall getaway is a posh charity harvest luncheon catered by up-and-coming chef Viv Holland. After fifteen years in London's cut-throat food scene, Viv has returned to the Gloucestershire valleys of her childhood and quickly made a name for herself with her innovative meals based on traditional cuisine but using fresh local ingredients. Attended by the local well-to-do as well as national press food bloggers and restaurant critics, the event could make Viv a star.

But a tragic car accident and a series of mysterious deaths rock the estate and pull Duncan and Gemma into the investigation. It soon becomes clear that the killer has a connection with Viv's pub -- or, perhaps, with Beck House itself.

Does the truth lie in the past? Or is it closer to home, tied up in the tangled relationships and bitter resentments between the staff at Beck House and Viv's new pub? Or is it more personal, entwined with secrets hidden by Viv and those closest to her?
Reviews from Goodreads.com

Sitting down with a new Duncan Kincaid and Gemma James mystery is like visiting with old friends. I love Deborah Crombie's characterizations and her wonderfully drawn plots. In this one, Duncan Gemma and their family are spending a beautiful fall weekend in the Cotswolds. They are guests at Melody Talbot's family's country home and everyone is looking forward to the break. (Melody is Gemma's Detective Sergeant). unfortunately, the weekend does not start out swimmingly for Duncan as he is involved in a fairly serious motor vehicle crash just a few miles from Beck House where the rest of his family is waiting for him. Then follows a couple of days of murder and mayhem in Lower Slaughter (the village close to where Beck House is located.) Ms. Crombie weaves her usual magic with her characters, and it's like we're right there where the action is. By the time we close the covers on the book, we feel like we know everyone intimately. I love this series, and now can't wait for Deborah Crombie to write the next one. Thank you so much for the escape Deborah. 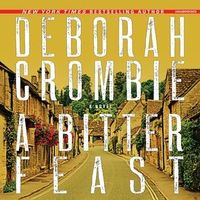