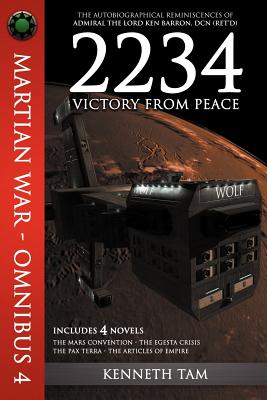 
The fallout of the Martian War was complex, and 2234: Victory From Peace follows Ken Barron, Karen McMaster and Charlie Peters as they struggle to help secure peace with Mars, and to prevent a coup on Earth that could undermine victory. Beginning at the peace convention on Mars, the omnibus reveals more of the tragedy of Egesta, and then candidly explores Emperor Luther Gregory's attempt to depose the Empire's elected government. Narrated by Ken Barron with his usual caustic sense of humor, this volume helps readers discover how close we came to defeat -- even after the last shots were fired.