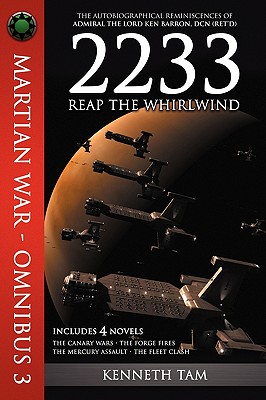 
Covering the third year of the Martian War, 2233: Reap The Whirlwind follows Ken Barron, Karen McMaster, Charlie Peters and their comrades through more adventure, romance, and combat. Beginning with a stop at Pion Rock, one of the most horrible and sensationalized places in the solar system, the omnibus moves on to three books that cover some of the most significant engagements of the Martian War: the battle for the base at the Forge, the assault on Mercury, and the Fleet Clash. With Ken Barron narrating in his usual caustic style, this volume brings readers to the end of hostilities with Mars, and sets up the year of political intrigue and chaos that follows in 2234.