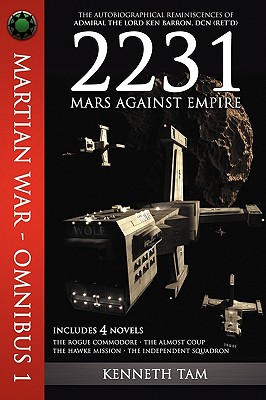 
An omnibus including the first four books in the Defense Command series, 2231: Mars Against Empire covers the outset of the Martian War. Earth's former colonists on Mars have built their 'Imperium', and now choose to launch a war against the Earth Empire for dominance of the solar system. In the process, they run head-first into the women and men of Defense Command. But even as the first shots are fired, political instability is taking root in the Empire, with the Emperor and the Parliament struggling for dominance. The Egesta crisis is also beginning, and that debacle will draw Defense Command into the worst peacekeeping disaster in Imperial history. It is thus a very complicated year, and narrating these stories, then-Commodore Ken Barron pulls no punches. With is wry (often lame) sense of humor, he candidly recounts the adventure, the romance, and the pain, producing what many feel is the definitive account of the period.