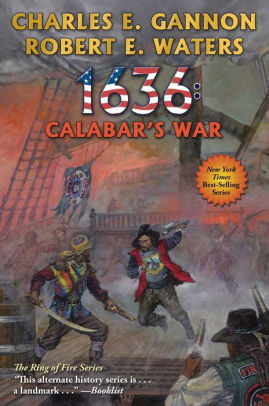 Share:
NEW ENTRY IN THE BEST-SELLING RING OF FIRE SERIES FROM NEBULA AND DRAGON AWARD NOMINEE CHARLES E. GANNON AND ROBERT WATERSDomingos Fernandes Calabar started out as a military advisor for the Portuguese in Brazil. But to his superiors, he was still nothing more than a mameluco, a man of mixed blood. Until, that is, the Dutch arrived and he switched sides. Then the Portuguese had a new label for him: “traitorous dog.” But when Dutch admiral Maarten Tromp arrives, having barely survived the disastrous Battle of Dunkirk, Calabar’s job changes again. Now he has to help engineer a swift Dutch exodus to a safer place before word of Tromp’s defeat reaches Spanish ears. Partnered with the Sephardic pirate Moses Cohen Henriques Eanes, the two aid the battered Dutch fleet by striking at the Portuguese and Spanish, both on land and sea. Until, that is, Calabar learns that bitter personal enemies have grabbed his family, put them in chains, and sold them to a slaveship bound for the Spanish Main. Calabar must now choose: continue to help the Dutch, or save his wife and children? Tromp and other strong allies want to put an end to slavery, too, but their strategies and timetable are measured in months and years. Calabar doesn’t have that kind of time and can’t rely on their methods. The struggle to recover his family, and to free the millions more suffering in shackles, is one he must win in his own way and on his own terms. Because ultimately, this is not just Calabar’s fight. This is Calabar’s war. About 1635: A Parcel of Rogues: "The 20th volume in this popular, fast-paced alternative history series follows close on the heels of the events in The Baltic War, picking up with the protagonists in London, including sharpshooter Julie Sims. This time the 20th-century transplants are determined to prevent the rise of Oliver Cromwell and even have the support of King Charles."—Library Journal About 1634: The Galileo Affair: "A rich, complex alternate history with great characters and vivid action. A great read and an excellent book."—David Drake "Gripping . . . depicted with power!"—Publishers Weekly About Eric Flint's Ring of Fire series: “This alternate history series is . . . a landmark . . .”—Booklist “[Eric] Flint's 1632 universe seems to be inspiring a whole new crop of gifted alternate historians.”—Booklist “ . . . reads like a technothriller set in the age of the Medicis . . . ”—Publishers Weekly