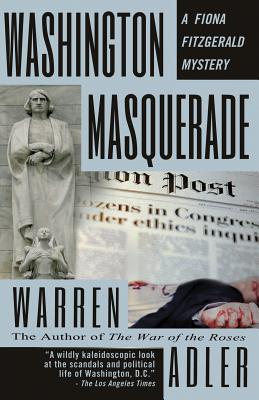 Fiona Fitzgerald Mystery #8: Adam Burns, Washington Post columnist and controversial Presidential critic, is dead. With no clear circumstance, speculation, gossip and rumor flood the media--accident, suicide or murder? Conspiracy theories run amok, accusing none other than the President of the United States of America. Was Adam Burns the target of a government hit squad? Did someone decide to silence his diatribes once and for all?
Fiona Fitzgerald, unlikely hero in Washington D.C.'s blue-collar, predominantly male police force, is entrusted with unraveling Burns' death. Born into the elite social circles of the nation's capital, and with privileged access to what lurks behind the pristine façade of the political establishment, Fiona is determined to expose the chicanery buried under prim rose bushes and concealed within the ceaseless Washington Masquerade.
Days roar by--Pressure mounts--Clues mislead--Intuition betrays. Can Fiona clear the President's name? Is one woman enough to stop a nation out for blood?
Washington Masquerade is the 8th book in Adler's Fiona Fitzgerald Mystery series.
Reviews from Goodreads.com