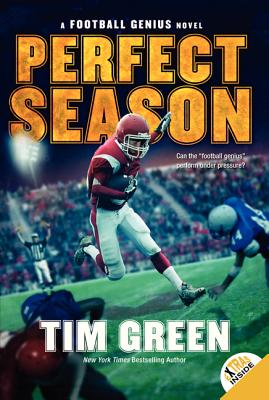 Tim Green delivers a gripping addition to his Football Genius series, with the tense action on and off the field that has made him a New York Times bestselling author. Perfect for fans of Mike Lupica's sports books!

Troy's dreams of the big time have backfired. Sure, he's moved to New Jersey to start his new job as “genius” for the New York Jets, but his dad has taken his entire salary, leaving Troy and his mom broke. Now Troy has no hope of going to private school and playing for a football powerhouse with his newfound cousin, Ty.

Instead he's going to be part of a team with an unbroken losing streak. Knowing that the road to the NFL begins at an early age, Troy fights back.

When he gets Seth to come up from Atlanta to coach his public school team, Troy feels ready for a winning streak -- a perfect season. He doesn't guess that he'll be struggling against those who want him to lose. When Troy's talent for calling plays slips and his abilities as a quarterback are threatened, he's got to dig deep. And it will take all of Troy's football genius to turn this team around.
Reviews from Goodreads.com