The Butcher of Smithfield — Susanna Gregory 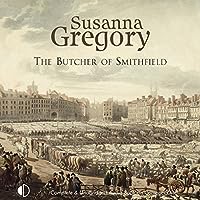 Thomas Chaloner, just returned from a clandestine excursion to Spain and Portugal on behalf of the Queen, finds London dank and grey under leaden skies. Although he has only been away for a short while, he finds many things changed, including the government slapping a tax on printed newspapers. Handwritten news reports escape the duty, and the rivalry between the producers of the two conduits of news is the talk of the coffeehouses, with the battle to be first with any sort of intelligence escalating into violent rivalry. And it seems that a number of citizens who have eaten cucumbers have come to untimely deaths. It is such a death which Chaloner is despatched to investigate; that of a lawyer with links to "the Butcher of Smithfield," a shady trader surrounded by a fearsome gang of thugs who terrorize the streets well beyond the confines of Smithfield market. Chaloner doesn't believe that either this death or the others are caused by a simple vegetable, but to prove his theory he has to untangle the devious means of how news is gathered and he has to put his personal safety aside as he tries to penetrate the rumor mill surrounding the Butcher of Smithfield and discover his real identity.