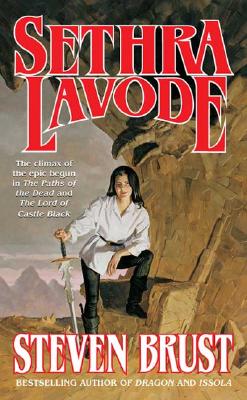 She's the oldest person in the Dragaeran Empire, a military genius and master of sorcery whose own story stretches back to before the dawn of history. She's Sethra Lavode, the undead Enchantress of Dzur Mountain. Now, after a long absence, she's returned to take an active role in the Empire's affairs—and the affairs of Khaavren, Pel, Tazendra, Aerich, and all their friends and relations.
Since the day Adron's Disaster reduced Dragaera City to a barren sea of amorphia, the Empire has been in ruins. The Emperor is gone, along with the Orb that was both his badge of office and the source of the magical power that in former times was practically a public utility. Trade has collapsed. Brigands rule the roads. Plagues sweep through the population. And an ambitious Dragonlord has moved to rebuild the Empire—in his own name, of course.
Unknown to him, Sethra Lavode has already helped the Phoenix Zerika, true heir to the throne, retrieve the Orb from the Paths of the Dead. Sethra means to see Zerika on the throne. But making it so will entail a climactic battle of sorcery and arms.
Sethra Lavode, Book Three of The Viscount of Adrilankha, is an epic fantasy—told with all the swashbuckling flair for which Steven Brust is known.
Reviews from Goodreads.com