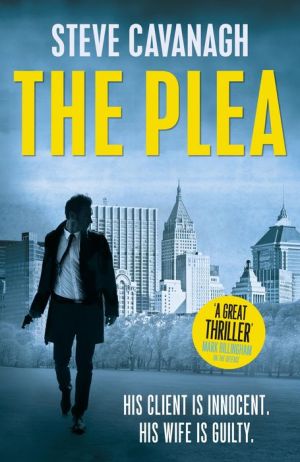 “Rip-roaring legal thriller…Twisty, bloody, and convincing.” —Ian RankinAn innocent client. A wife in jeopardy. Who will take The Plea? When billionaire David Child is arrested for the murder of his girlfriend, Clara, the FBI believes they can get him to testify and take down a huge money laundering scheme. Con-artist-turned-lawyer Eddie Flynn is given the job: persuade David to plead guilty and give the agents the evidence they need. If Eddie can’t get David to take a plea bargain, the FBI has incriminating files on Eddie’s wife – and will send her to jail. But David swears he didn’t murder anyone. The evidence overwhelmingly shows that David killed Clara: the security video showed no one else entering their apartment, the murder weapon was in his car, and he was covered in gunshot residue he can’t explain. Yet as the FBI pressures Eddie to secure the guilty plea, Eddie becomes increasingly convinced that David is telling the truth. With adversaries threatening, Eddie has to find a way to prove David’s innocence and find out if there’s any way he might have been framed. But the stakes are high: Eddie’s wife is in danger. And not just from the FBI… The Plea is a locked room mystery from Steve Cavanagh, the author Nelson DeMille compares to John Grisham, Scott Turow, and Brad Meltzer. “The Plea is one of the most purely entertaining books you'll read this year. It's a blast.” —John Connolly, bestselling author of the Charlie Parker novels
Reviews from Goodreads.com

The Plea is the second book in the Eddie Flynn series by American author, Steve Cavanagh. Eddie Flynn is a former conman turned lawyer. He was, formerly, not too choosy about whom he defended. On Sunday March 15th, Eddie Flynn arrives at his office to find the FBI and the CIA rummaging through his files. They want him to steal a client from a prestigious law firm, convince him to plead guilty and then do a deal with the DA. David Child, wealthy social media developer, is the defendant in a murder trial, but he has something the CIA wants.

Why should Eddie help? Unfortunately, those agencies have information that, despite her pristine legal record, will put his estranged wife, Christine behind bars for many years. A mere 48 hours (and several dead bodies) later, Eddieâ€™s involved in a deadly shootout and facing the same gun as killed the first murder victim.

Eddie Flynn: realist or cynic? â€śLawyers donâ€™t usually question whether or not a client is telling the truth. That way lies madness. You do what you have to and trust the system. So, the guilty plead guilty. The innocent fight their case and the jury decides. If a by-product of that process is the emergence of truth, then so be it, but the truth is not the aim of the process. The verdict is the aim. Truth has no place in the trial because no one is concerned with finding it, least of all the lawyers or the judge.â€ť This time, though, heâ€™s fairly certain his client is telling the truth.

Cavanaghâ€™s second Eddie Flynn novel matches the first as a fast-paced legal thriller. He again gives the reader a plot with twists, surprises and not a few red herrings. Itâ€™s a rollercoaster ride of car chases, cons and tricks, and clever court-room scenes, culminating in a dramatic climax. His smart and talented protagonist is a flawed character with a good heart. Eddie is able to think on the run, and is fortunate to have a network of skilled and reliable people he can call on to help. Another page-turner that will have fans keen for The Liar.