The Jack of Ruin — Stephen Merlino 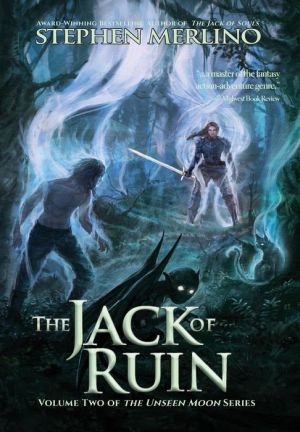 
Harric's immortal enemy, Sir Bannus, lies defeated in the valley, his army buried under tons of mountain rubble--a rock fall that Harric brought down with the magic of the Unseen Moon. For now, the quest to deliver the Queen's peace treaty to the mysterious Kwendi is safe.
But Sir Bannus rises from defeat with Harric's name on his lips, vengeance in his fist, and a vow to capture the treaty-bearers and spark war to bring ruin upon the Queen. To Harric, death would be preferable, for if she falls, Sir Bannus or another of the Old Ones will reclaim the throne and cast women and bastards like Harric back into slavery.
Yet Harric's companions condemn his use of trickery and magic to fight Sir Bannus--tools that saved them once before, and which he believes are as vital as swords for the Queen's protection.
When treachery, discord, and death doom the quest, Harric must choose between the love and regard of his friends and his self-chosen destiny as Her Majesty's Unseen protector.
It is a choice that will forever bind him to one...and bring ruin to the other.

THE JACK OF RUIN is sequel to the multi-award-winning novel, THE JACK OF SOULS. The Midwest Book Review said of THE JACK OF SOULS, ..".a terrific read from beginning to end and clearly establishes Merlino as a master of the fantasy action/adventure genre. Highly recommended..."
* * *
"THE JACK OF RUIN picks up right where THE JACK OF SOULS left off, and it doesn't disappoint. It's so easy to get lost in the magical world of Harric and Caris."
--Corrine O'Flynn, USA Today Bestselling Author of The Expatriates series
* * *
"A vividly imagined world full of engaging characters."
--Craig Holt, author of HARD DOG TO KILL
* * *
Reviews from Goodreads.com