A Flaw in the Blood — Stephanie Barron 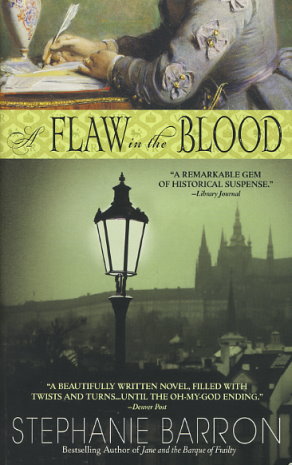 The acclaimed author of the bestselling Jane Austen mysteries brings rich historical immediacy to an enthralling new suspense novel centered around Queen Victoria's troubled court...and a secret so dangerous, it could topple thrones.

Windsor Castle, 1861. Prince Albert, the Queen's Consort, lies dying, and Victoria summons Patrick Fitzgerald, the clever, embittered Irish barrister who helped defend Her Majesty from a would-be assassin twenty years earlier. Within hours, Fitzgerald's beautiful ward is nearly murdered, his chambers are ransacked, and another girl lies dead. Could an unknown force at Windsor want Fitzgerald silenced? And why? The answers are entangled in an electrifying tale of intrigue, seduction, and betrayal, partially narrated by Europe's most powerful monarch.

As fascinating as the Queen herself, seamlessly blending history and suspense, A Flaw in the Blood is an elegant thriller that is utterly convincing -- and utterly surprising -- to its very end.
Reviews from Goodreads.com